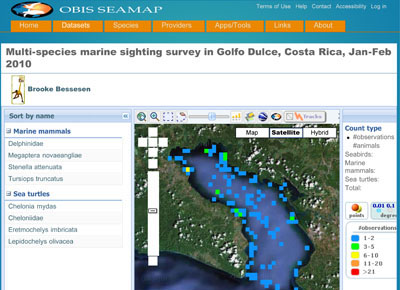 So, I am excited to announce that our 2010 whale, dolphin and sea turtle data has been added to OBIS SEAMAP: http://seamap.env.duke.edu/datasets/detail/708.  OBIS (Ocean Biogeographic Information System) is an international marine species database that assists in the identification of biodiversity hotspots and large-scale ecological patterns around the globe.

By providing the first data for Golfo Dulce, we have put it on the map—so to speak—and decision makers now have access to baseline information, which may prove helpful when evaluating marine spatial planning initiatives (like a tuna farm). It is one more step forward in my effort to reveal the abundance of marine life that makes Golfo Dulce such a rich and important habitat.