Welcome to My New Blog 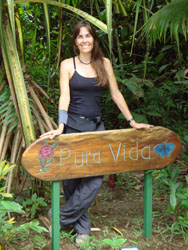 Hola, mis amigos! I am writing this blog, my first ever, from a tropical rainforest. I am in Spanish-speaking Costa Rica—a small, incredibly beautiful country in Central America, which remains home to a broad array of interesting and awe-inspiring animal species: jaguars, ocelots, harpy eagles, poison dart frogs, kinkajous, Caiman crocodiles, and a multitude of bizarre insects that twist the imagination into odd new shapes. All of these, and so many more, thrive in the towering greenness that marks this rich landscape.

Here, it is never silent; every minute is a concert of sounds. Birds, insects and/or frogs are constantly chittering. 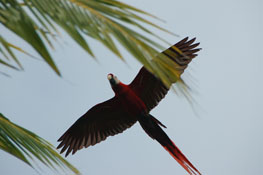 And morning brings scarlet macaws, who fill the pale blue sky like slender red crosses, squawking enthusiastically on their short migration to a strand of beachfront almond trees. Troops of Howler monkeys have been bellowing to one another, barking in the distance for several hours—a rapturous cacophony that is strangely offset by the sweet whisperings of a morning breeze, cool and fresh, dancing through the forest and gently rippling the mosquito net encapsulating my bed. Right now outside my open-air cabina I can see several spider monkeys, rust-colored and gangly-limbed, bending the highest branches of the canopy and spilling leaves as they clamber across the treetops in search of fruits and nuts. A thrill to my eyes, such is daily life in the rainforest.

I am here for a few weeks working as a research assistant for Friends of the Osa, a conservation science organization. We are studying the nesting patterns of sea turtles. Two species, Olive Ridleys and Green sea turtles are most common in this area. Females, heavy with eggs, frequently haul themselves up onto a remote beach near our camp from June to December. We patrol that beach at night to collect data about the arriving mothers and their nests. We also help protect the turtle hatchlings that emerge from the nests, so they may safely make their way to the rushing currents of the Pacific Ocean. It is a small but important conservation effort. 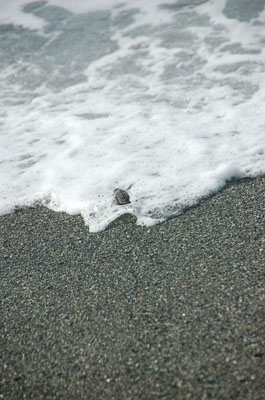 Just a few hours ago, in the moonless darkness that linked sunset to dawn, I knelt on the beach and cupped three tiny turtlings in my hands, positioning them toward the soft foamy waves. They were the final babies to emerge from a now-empty nest, weaker than the rest who had all gone into tide hours before. Within minutes of taking their first breath of open air, nature thrusts newly hatched sea turtles headlong into a dangerous world with nothing but strength and intuition to carry them. I worried for those last stragglers as they tottered forward unsure and tumbled into the sea. I hope time and luck will bless them… that their shells will stretch… that they will avoid predators, fishing nets and pollution and grow large into adulthood. And I hope someday, many years from now, the females return to this beach to lay eggs of their own. Each generation is a new beginning and the continuation of a magical process that has sent sea turtles oaring across ocean waters for millennia.

On the weary walk back to camp, we spotted a collared anteater also called tamandua, a charming animal with a smaller body and shorter snout than its Giant anteater cousin. He was busy, going about his nocturnal life; he waddled past and quickly climbed up a tall narrow tree, disappearing into the stars overhead. When at last I crawled beneath my mosquito net and pressed my head to my pillow, I dreamed of him… and of turtles. There is much to tell of my time here in this special place—this land where ancient rainforest meets ancient sea—too much for one day. 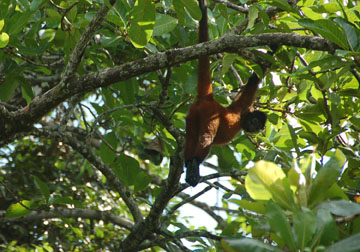 But I will come to reveal my adventures, story by story, photo by photo, here in this blog. And when you know all the details of this journey, I shall take you on another. In this way we will travel together. Sometimes I will pack you along to destinations far from home—trips, present or past. Other times I will share animal adventures from my own neck of the woods doing wildlife rescue or zoo work. But always we will explore the magnificent lives of animals and ponder the greatness of the world around us.

Until next time, Salud.