It All Started with an Elephant

Posted on October 8, 2010 by admin
Today I worked at ACC (the Phoenix Zoo animal hospital). I used to be on staff there. That was years ago. Now I simply cover occasional days throughout the year.

I still love it. And this morning, as I was weighing a corn snake with skin the color of sunshine, lifting its sinuous body onto the gram scale, I got to thinking about the special relationship I’ve had with the zoo over the past two decades. 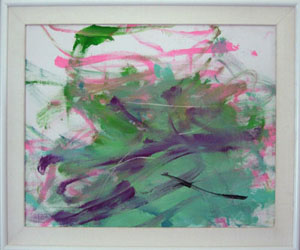 My first interaction with the Phoenix Zoo was around 1991 when I was given the special opportunity to buy an original Ruby painting, which was something like being invited to the moon by Neil Armstrong. Ruby was the zoo’s famous painting elephant. I had recently read her story in Smithsonian Magazine and still remember the thrill of carrying her artwork to my car, feeling I had escaped with a treasure beyond any sum of money. Ever since, Ruby has decorated my bedroom wall in warm pinks and teals. 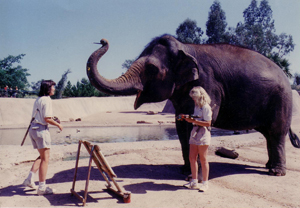 Ruby l'artist (this photo came with my painting) 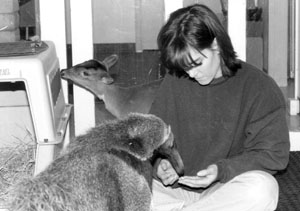 working with an anteater and muntjac in the 90s

In 1994 I applied for a job at the Phoenix Zoo and worked several years as a veterinary technician/keeper at ACC. I found a world of like-minded people; many became life-long friends. I even met Ruby! She was incredibly beautiful and smart, if a little temperamental (as artists are known to be). It’s still so painful to recall the day Ruby died after complications with a pregnancy. The entire zoo collapsed into mourning. Not long after, I left my ACC job to take a full-time position producing television.

My involvement with the zoo might have ended there, but life is an intricate weaving and certain threads cross many times.

Years later, while producing a story on Black-footed ferrets for National Geographic Channel, I found myself back at the zoo, shooting footage of two old keeper friends and celebrating their efforts to save a species (watch the video at http://www.brookebessesen.com/videos.html).

Soon after, I met Cristina Carlino. I was producing a story for the Style Network about the international hair and skin care company, philosophy®, which has delightfully simple yet insightful packaging. Cristina was the company’s founder and during our interview I discovered she was a fan of the late great Ruby.

She told me she had always wanted to do one of her popular charity products to support elephant conservation, so I put her in touch with people at the zoo. As that project moved forward, Cristina offered me the profound honor of writing the bottle copy. Another trip to the moon. To this day, ruby graces a shelf near my painting… a reminder of life’s mysterious interconnectedness. (Read the bottle copy at http://www.brookebessesen.com/writing.html.)

It’s no surprise then that when my first book was published in 2004, the zoo hosted the launch. It was so fitting. That sunny April day, surrounded by friends and family—and all the animals who sit at the center of my heart—I slipped into my newest skin. Author. Ambassador. Liaison. Whatever the title, I now transform my work with wildlife into written words. Much like producing stories, just a more solitary form. 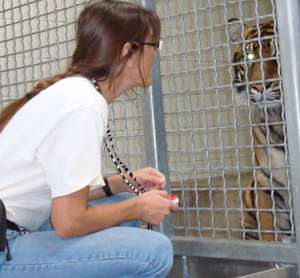 A final twist: Since I kept up my veterinary technician certification, in 2007 I was asked to do relief work at ACC and, back under the zoo’s auspices, I soon expanded my writing to scientific work, another level of knowledge sharing.

I have come full circle.

Time rushes like a mighty river—with unremitting speed and strength, it sweeps us along. How could I have known the zoo would be such a significant part of my life journey? My work there has fostered a deeper fascination and respect for the natural world. It has spurred my interest in conservation research, inspired me to personally help protect wildlife.

And it all started with an elephant. I think of myself back in the early 90s, so young, Ruby wrapped in my arms, relishing my stroke of good fortune. Unknowing that so much would come to pass. Unknowing that I would be working today at ACC, hair in ponytail, zoo radio on my belt, a gorgeous corn snake in my hands.

This entry was posted in Desert Dwelling, Earth’s Amazing Creatures, Life as an Author-Illustrator. Bookmark the permalink.