Do I Know You? Building a Foto-ID Catalog of Bottlenose Dolphins in Golfo Dulce 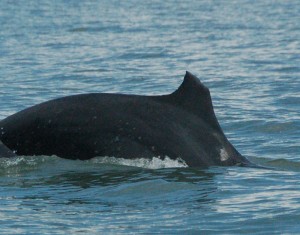 Most of you know I have been working toward identifying the Bottlenose dolphins (Turciops truncatus) inside Golfo Dulce. After my first round of research I was able to recognize about 40 individual dolphins, some of which can be seen in my 2010 report. Now, after two years of laborious investigation, I have come to identify about twice that many!

You may be wondering how exactly one goes about identifying dolphins.

Of course dolphins don’t sit quietly at the surface while you study the intricacies of their dorsal patterns, so ID work is best done through photos. A good close-up photo allows us to visualize, even trace, the dorsal outline. Once we “know” this dolphin, we can often recognize it from a distance. We can then go back and look for it in other sighting photos and thus begin tracking its movements, as well as associations with fellow dolphins. It’s a tedious task, yet also exciting. Every sea of dorsal fins suddenly becomes an intriguing puzzle of who’s-who!

If you followed my facebook page, you may remember seeing a picture of a Bottlenose named Dorsal A. Dorsal A was the first dolphin Jorge and I recognized during our 2010 survey.  With a fully severed fin, it’s no surprise that Dorsal A stood out in the crowd. But variances are rarely so obvious. Here are a few more of Golfo Dulce’s Bottlenose dolphins to test your discerning eye: 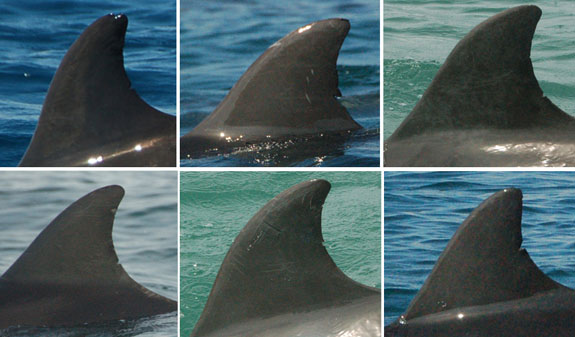 There are similarities. But take note of EVERY mark—especially nicks and notches in the trailing edge that could be seen from either side. Would you recognize these individuals if you saw them again? With side-by-side photos, I suppose you would.

Okay, so now you are probably wondering, why go to so much trouble?

Researchers create Foto-ID catalogs and databases to expand scientific understanding of dolphin populations and their habitats. That is my goal for the Golfo Dulce group and I hope to rally other Golfo Dulce researchers to collaborate. By combining current, historical and future photos, our database will have broader impact. But good science is only part of it. I am also sharing my Foto-ID images to serve outreach programs.

Familiarity breeds a sense of responsibility—we are more likely to help those we know—so Osa Conservation has been working on a Community Dolphin Project to introduce the locals to the most recognizable and/or commonly seen individuals. By connecting people with their dolphin neighbors they will hopefully be inspired to protect them… and the gulf.

For me it’s a circle of work. Wildlife. Science. Knowledge-sharing. Conservation. And if I’m lucky enough to meet a few dolphins in the loop, how in the world could I complain?