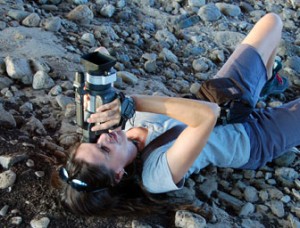 my head in bat guano… hey, gotta get the shot

You know me—I love bats! And loving bats as I do, I have always wanted to make a trip to Tucson to see the large colonies of migratory Mexican Free tail bats (scientifically Tadarida brasiliensis) that flutter north into Arizona ’s summer swelter. Thousands of them roost under Tucson ’s expansion bridges between the months of May and October and their nightly emergence is a wildlife must-see!

So my husband, Kevin, and I hopped in the car and headed south. We carved the winding back roads from Scottsdale, a more scenic route that slips between thick creosote and towering saguaro, two hours of glorious, mostly unbroken desert. Arriving in Tucson , we parked near the crossroads of Campbell & River. The bridge spanning the Rillito River has one of the highest bat occupancies in the area and—bulging, all cameras and eagerness—we dashed down into the wash to survey the underside of the viaduct.

Although the tiny Chiropteras (the order means “hand-wing”) hide too deep in the expansion grooves to visualize during daylight hours, the ground beneath gives away their warm sleeping bodies; in the river bed, the sand is striped with thick brown, pebbly-looking bat guano (code for “poo”).

At this point it was still only 6pm and yellow beams still poked at overhead clouds, too high on the horizon. So we waited. We ate. We watched. And watched some more. Then, about 7:15pm , just as the sun began her curtsies on a stage of purple mountains, we started to see little bat faces peeking out from the blackness. What a delight! Thousands of wrinkled noses and pink tongues edged into the dusky air, anxious to twist and swirl into the cobalt world. Soon bat chitter rang between concrete and stony earth, a rumpus of squeaks and screeches and clicks, a ruckus, a rally—precursor to one of nature’s greatest performances!

7:35. Let the show begin! Clouds of tumbling brown fell, swooped and rolled away to the west, hungry bat bellies seeking the night’s feast.

This entry was posted in Desert Dwelling, Earth’s Amazing Creatures. Bookmark the permalink.