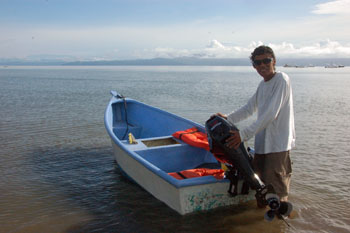 Jorge and I wasted no time getting out on the water in our miniture-sized boat, newly named Caja de Fósforos, and that first day had a coming-home feeling. The Gulf was just as I remembered it and I found myself delighting in the familiar landmarks—the emerald peaks of Piedras Blancas National Park, the sirena statue guarding the palm-lined beaches of tiny Playa Blanca, white rolling waves crashing on the rocks near Tamales and, to the south, the mouth of Golfo Dulce, open as though saying something thoughtful and neighborly to the coast of Panáma seen through the haze. My soul instantly reintegrated.

A pod of Pantropical Spotted dolphins stitched past. I was surprised by their disinterest; we could always count on them to swirl about our boat for a bit of play. Why no interest today? Then we noticed that the group was subtly divided into pairs and each pair arched in unison with one large and one small dorsal fin rhythmically breaking the water surface. Mothers with calves. 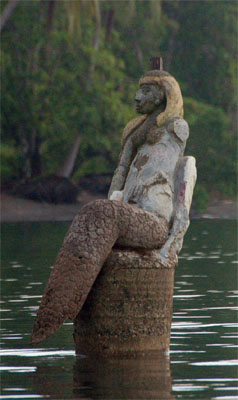 mermaid statue among the reefs of Playa Blanca

Ah, yes, this study was about seasonal shifts after all, and here was my first inkling that life might be just a little different in Golfo Dulce during the rainy season. We watched Blue crabs that day too— little aquatic crustaceans I hadn’t seen before—kicking around at the surface.

Although storm clouds could be seen in several directions, the rain held its breath over the water and blue skies prevailed. And a few sea turtles lifted their heads to nod our passing. It was a spectacular day of seascapes.

However, arriving back at the marina in the afternoon, Jorge and I discovered that in our enthusiasm we had made one troubling miscalculation of timing. The tide had dropped and now 500 feet of sand stretched between us and our trailer. A bigger boat could be moored in the deep water. But Caja de Fósforos would sink in a soaking rain so had be hauled out every day. Because our old truck was too weak manage the steep launch ramp, we had used the shoreline for access.

I looked at Jorge hoping he could pull a bit of his rainforest magic.

“Eye-yey-yey,” was all he could muster.