Nature is a Mother 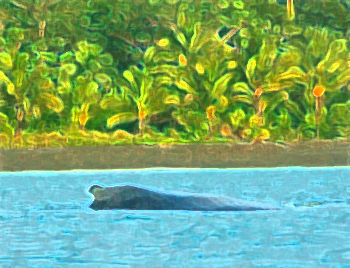 The whale descended. Minutes passed. When at last it rose again, it began breathing heavily as if in pain. Its blowhole gapped open and closed with increasing strain. The kayakers ached with compassion, their fiberglass crafts bobbing over tiny ripples caused by the labored inhalations. What, if anything, could be done to help the distressed whale? Was it dying? Suddenly the water flashed crimson. Great plumes of blood swelled from the behemoth as it drew a final jagged breath and slipped below the surface.

As the kayakers peered down at the black form, an odd movement twisted the depths. Moments later, a small wrinkled mass surged upward and broke the water’s surface—a newborn calf—pushed into the daylight by its mother for its first sweet breath of air. The kayakers had watched the birth of a Humpback!

When one of the men told me this story years after its occurence, his eyes twinkled with a hint of tears. Such emotion seems inevitable. Whales have long inspired reverence in the human heart, and having seen other kinds of babies born myself, I know the miracle of nativity leaves no witness untouched. But their experience was made even more amazing by its rarity—only a few people have ever seen a Humpback delivered! Despite years of research, mother whales still keep their secret. Magnificent titans, they surface and dive like black stitches across blue fabric, weaving mysteries of life we have yet to unravel.