Jump for joy! The impending Yellowfin tuna farm permitted for construction near the mouth of Golfo Dulce has been stopped! As Jorge would say, “Yipy!” In early November SETENA (Costa Rica’s Environmental Secretariat) took decisive action when it ended negotiations with Granjas Atuneras de Golfito S. A. The foreign interest conglomerate had been pushing for seven years to develop the tuna farm but was finally blocked after failure to comply with a Supreme Court order to perform an environmental impact study.

Well, they might not have conducted an investigation in Golfo Dulce, but Jorge and I certainly did. It was the tuna that first spurred our research. In January-February 2010 we undertook our first multi-species sighting survey to collect and publish baseline data on sea life before the area could be changed or damaged by a mariculture project. The interesting findings from that study, which were presented in my 2010 project report, justified funding for the recent extension survey in July-August of this year.

Which brings me to my second bit of exciting news: The Rainy season extension of the multi-species marine sighting survey in Golfo Gulce, Costa Rica, July – August 2011, final report and comparative summary is now available. This new paper not only illuminates details of our 2011 (rainy season) findings but offers a comparative look at the 2010 (dry season) data. 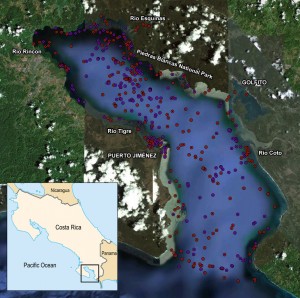 In fact, if you combine both surveys, Jorge and I logged a total of 55 days on the water for a total of 424 observation hours. And we recorded 458 sightings for over 38 species of marine wildlife! Whew!

What were the highlights?

What an honor to be able to share these incredible insights—Golfo Dulce is clearly an important marine habitat for many species! BTW… I’ve posted photos and video of several animals in previous blogs and on my Facebook page, so you might want to browse around.

Now that Golfo Dulce is no longer under imminent threat of a tuna farm, there is  time for even more research. Many excellent biologists are conducting studies on specific species and their emerging data is just as exciting as ours. In fact, there is every indication that Golfo Dulce will gain international recognition as a rare tropical fiord with a unique ecology. So thanks to everyone who worked so hard to protect it! 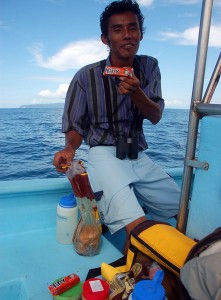 Jorge holds up a Yipy candybar during our 2010 survey. It became a running joke between us.