Wake-up! There’s a Rooster in the Kitchen 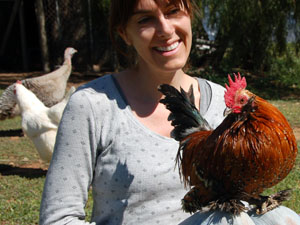 There is one bird I love most at my dad’s ranch—the cutest, sweetest, most beautiful little rooster in the world. He likes to sit on your lap and have his ruddy feathers stroked and he’s so friendly you can scoop him up in one loose hand.

So you can imagine my concern when Kevin and I arrived to babysit the ranch for Dad and Marie-Laure and discovered that the rooster was acting sick. ML told me he pecked around like he was eating but he didn’t actually take any food in. His beak was a little overgrown and when I felt his breastbone he was much too thin. Beleaguered with packing for their enormous trip, ML hoped I might know how to help.

After my folks got on the road, I tried to hand feed the rooster. Nada. He half-heartedly pecked into my cupped palm and then got woobly and sat back to recover his balance. By afternoon he was fluffed up and motionless and I knew he would not survive another cold night without food.

Because birds have incredibly high metabolisms they can lose weight (and strength) very rapidly. Once they pass the tipping point and can’t keep up their body temperature, it’s a quick fall into hyperthermia and most don’t survive. Heat is critical! At the zoo we put sick birds into an incubator set at 104°F. Of course here at the ranch I don’t have an incubator, so I found a pet carrier and a space heater and got my beloved rooster set up in the warm kitchen. 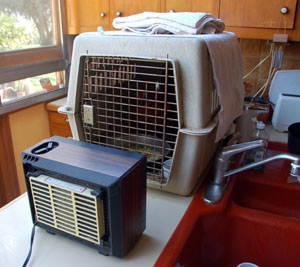 At the zoo we inject subcutaneous fluids to help stabilize the body. No medical fluids here, so I found a large dropper and did my best to get him to drink at least a little water. It wasn’t enough to rehydrate him, much less contribute the calories needed for recovery.

At the zoo we have syringes with long soft tubes that can be slipped down into a bird’s crop for adding high-calorie gruel. No such thing exists on the ranch. Or does it??? I got to wondering if I could make something to do the trick. Instead of a syringe, I had the dropper—maybe that would work. I hunted around the house until I came up with a length of relatively soft tubing off an old bottle pump. Amazingly the tube fit perfectly in the tip of the dropper and with a few test runs over the sink, I had a working delivery system.

Next I mixed some water with raw egg (wierd maybe, but recommended because chickens are omnivorous) and then soaked and added some lay crumble. I poured the runny contents into my dropper and Kevin held our patient still while I carefully ran the tube into his crop. Years of experience and a good eye assured I didn’t go into the lungs.

After the tube-feeding I put the rooster back in his carrier and cranked the heater. But he looked terrible. Much worse, in fact! Instead of sitting, he collapsed onto his chest, eyes closed tight. My mind spun with worry. I was confident I hadn’t gone into his lungs (confirmed by the fact he wasn’t coughing). And even though the tube wasn’t quite as soft as it should have been, I didn’t think I’d punctured his crop—I’d been so cautious. Maybe he had an illness that kept him from eating and was exacerbated by adding food. Ugh. Nothing to do but wait. 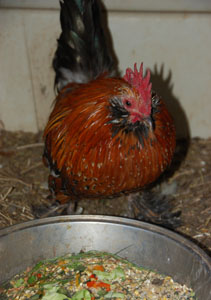 I tried reading. Checked email. But every 10 minutes I scurried back to make sure my chicken was still breathing. He slept a long time—the sleep of someone who needs it. Then as I quietly prepared dinner, he suddenly popped up and started ravenously eating from his dish. It worked! I trimmed his beak and he’s been gorging like a Roman king ever since.

Kevin and I thought having a chicken in the kitchen was SO funny! We cracked up every time we sat down to eat a few feet away. I’ll have waffles and coffee… oh, and the rooster wants another serving of scratch, please. Ha!

Perhaps you have already considered the downfall to all this folly. Every morning we were rattled awake by his startling predawn crow, which rang through the house like a living alarm clock. Okay, that part was not so funny.

This entry was posted in A Traveler’s Journal, Animal Rescue, Family Fun. Bookmark the permalink.