It was heart retching to see a baby so emaciated! Last week I happened into the garage and, glancing down, discovered a hatchling Western Banded gecko (scientifically named Coleonyx variegates) stuck in an empty dog bowl and nearly dead from starvation. 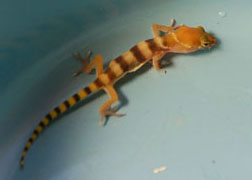 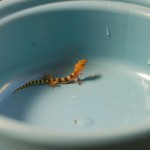 Like other lizards, a banded gecko absorbs the last of the yolk sac inside its egg just before hatching—a bolster of nutrition to hold it over until its first meal. This little guy was days, maybe only hours old when he somehow slipped into the bowl and found the edges too steep for escape. I do not know how long he suffered without food or water before I finally spotted his miniscule frame and stooped in horror. I could hardly believe he was still alive. Under two inches long, his body was mostly bone, his tail thin as a thread. And the skin along his sides had folded into long yellow stripes from dehydration.

Urgently, I carried the bowl into the kitchen and transported a single drop of life-giving water from my fingertip to a spot just in front of his face. He immediately smelled the moisture and began lapping up the liquid, eyelids closed in weakness and gratitude. I covered the bowl to let him recover his senses. Within twenty minutes the skin on his thorax had filled out. My recuperating patient was then set up in a small terrarium with some native plant clippings and a hide box made from butter packaging. Kevin was sweet enough to stop at the pet store to buy pinhead crickets, two of which the gecko gobbled in an instant. 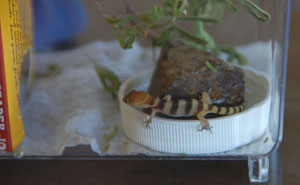 I do not like to keep animals—wild creatures should be allowed to remain wild. Normally I’d just relocate a misplaced critter to a suitable outdoor spot around the house. But this gecko would never survive in such poor condition. A dazed lizard is quick food for wandering predators. Plus he needs energy to chase and catch prey, and a bit of tail fat to sustain him into the chill of winter. So he stayed with us for a few days while I observed and logged his progress. He rested. And ate. And within a week he appeared in much better shape. I knew I could not wait any longer to let him go. In fact, with October tugging down on the thermometer, I worried it might already be too late. I wanted to be sure his release offered enough time to stabilize in the environment before his first hibernation.

I emailed a friend (and reptile expert) at the zoo for advice and, looking at my photos, she agreed he showed significant improvement. She encouraged me to send him out as soon as possible, before fall temperatures drop any lower. So yesterday I looked for a nice area with protective rocks and ground cover in the wash behind our house. And I let the gecko go!

He was set free with a full belly and, I hope, the necessary resources to grow into adulthood. Like all releases, it was bitter-sweet for me, simultaneously thrilling and worrisome. However, I did manage to click one final photo before that banded baby slinked under a rock and disappeared from sight. And when I compare this picture to the first one, the one of him in the dog bowl—when I see his resilience, his fortitude—I am filled with confidence that he will, indeed, survive. 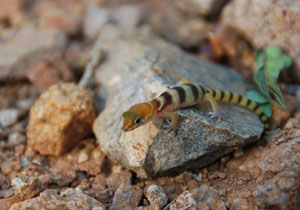