Oshkosh, WI—August 2010—Every year, thousands upon thousands of aviation enthusiasts from around the world converge on Oshkosh, Wisconsin for the EAA AirVenture convention, arguably the largest gathering of pilots and planes anywhere. Attendees can listen to celebrity speakers and peruse show-stopping aircrafts. Many guests stay the full week, subsisting on little more than brats and ice cream cones and airplanes.

The annual event offers an array of thrilling sights and sounds, but perhaps most enjoyed are the daily air shows, when daredevil pilots twist the skies to the collective gasps and cheers of fans along the flight line. Zip—Zoom! Brightly bedecked planes dip and yaw overhead as the excited crowd shouts and waves from the ground.

Sunday, the final day of the convention, an especially prestigious line-up of performers dazzled onlookers with their aerobatic cunning. One after another, famed pilots in remarkable vessels—colorful crop-dusters, tricked out rocket gliders, fully-restored warbirds—took turns executing loops and rolls and dives of shocking endurance.

Yet nobody was prepared for what would happen next… 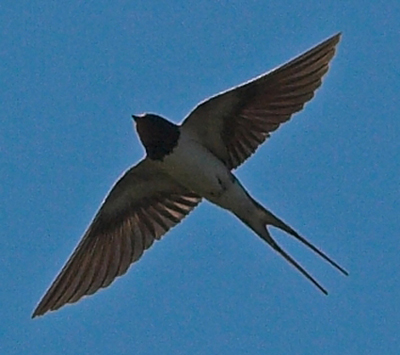 After pilot Gene Soucy and wingwalker Teresa Stokes finished their breath-taking routine and before the next act began, there was a short lull in the show, and for a few moments the wind over the runway fell still. Just then, a Barn Swallow, decorated in flashy blue and buff feathers, unexpectedly swooped into view, exhibiting his spectacular ability to catch insects on the fly. Great acts of daring ensued. Dives. Rolls. Tumbles from on-high from which he recovered only moments before crashing into the earth.

“What an extraordinary aviator!” exclaimed Brooke Bessesen, who was watching with her pilot-husband Kevin Steiner. “At first we didn’t notice the bird, but soon his aerobatics captured our attention and we became enthralled with his clever routine. I always love air shows, the pilots are amazing. But truth told,” Bessesen added with a chuckle, “that little guy out-maneuvered everyone!”

Eventually the barn-storming Barn Swallow gave way to the next act, dropping deftly into the grass as an enormous Air Force fighter jet shot past, afterburners aglow. Reaching mid-field with mighty speed and a thunderous roar, the jet’s military pilot gave a slight tip of his wing. Viewers who had missed the previous performer, small and unassuming as he was, may have thought the wave was for the crowd. But in fact, a reliable source confirmed the tilt was an honorable salute to the brave little swallow for his heartfelt showmanship at this year’s Oshkosh event.

This entry was posted in A Traveler’s Journal, Earth’s Amazing Creatures, Family Fun. Bookmark the permalink.