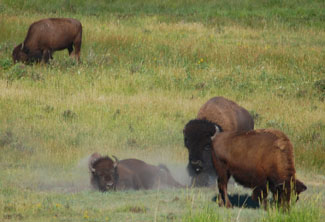 I have only been to Yellowstone National Park two times and each visit lasted less than twenty-four hours. Still, I have had—hands down—more wildlife sightings there in terms of both number and sheer variety of species than any other place in the continental United States. In that vibrant square of land posed in the northwest corner of Wyoming and protected since 1872, nature resides in full aplomb.

During my most recent visit to the park, I carved out a mere twelve hours for exploration—hardly enough time to even drive the winding loops that regale with chilling cliff-edge views, heady stands of pines, blue ribbon rivers and kaleidoscopic sulfur-scented geysers. Yet despite time constraints, I spied hundreds of forest denizens, including grizzlies, elk, deer, bison, pronghorn, coyote, osprey, bald eagles and as you read in my last blog, grey wolves. Some sightings were but specks migrating across distant grassy knolls, but many were close enough to catch musky odors on the passing breeze.

I have worked with many bears in captivity and encountered black bears in the wild, but this trip provided my very first glimpses of free-ranging Ursus arctos horribilis, those heavy shouldered brown bears disconcertingly dubbed “grizzly”. Impressed by their size, and more interestingly their social behavior, I spent hours watching them. First, I observed five bears near a carcass. 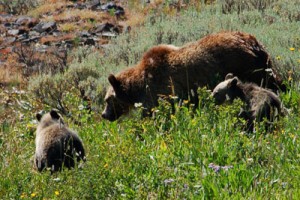 The scene unfolded as four of them milled around, posturing, while one dominated the food, tugging with the full burden of its weight to rip small shreds off the remaining flat blackened meat. Later, I lucked out to see a mother bear with two cubs in a roadside meadow, nursing and grubbing around within 100 yards. Savvy to the surprising speed of a mother bear, I admittedly kept my attention piqued to changes in her demeanor.

I stopped to chuckle at herds of  buffalo, males grunting and pushing and rolling and following females with their tongues lolling out. I saw squirrels and birds and butterflies. Each and every wildlife sighting thrilled me. 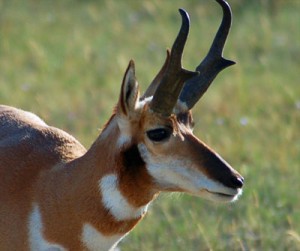 But I was equally excited by the creatures I didn’t see. I squinted into the blur of tree trunks, just wondering who was out there, hidden from view—surely a plethora of species, a whole national park filled with fauna, animals going about their days free from guns and loggers, mining and oil spills.

It’s no small feat to preserve such a magical place. In fact, did you know there was considerable opposition to the creating of Yellowstone National Park? Some feared the restrictions on resource development would hurt the economy. Even after it was established, arguments raged, regulations shifted, jobs were lost. It was the same struggle that exists today over different, but equally vital habitats (think Alaska/Arctic National Wildlife Refuge).

Yellowstone supporters said entrance-paying visitors would repay the country year after profitable year. Today, I cannot speak to the earnings of the park but the annual number of visitors is around 2.5 million! In fact, there are so many tourists in the summertime, both American and international, that air pollution from vehicles clogs the busiest fairways and a shuttle system will soon be required to make inner-park transportation easier and more sustainable. 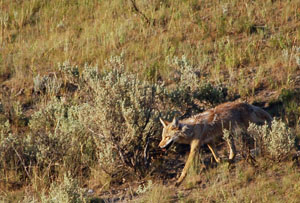 Suffice to say, the place is popular.

And it’s no wonder. My photos reflect the rewards of 1800s forward-thinking. All I can say is thank goodness there are people willing to forge into the political fray to save some natural landscapes for the rest of us.

I’m pretty sure the bears appreciate it, too.

This entry was posted in A Traveler’s Journal, Earth’s Amazing Creatures. Bookmark the permalink.