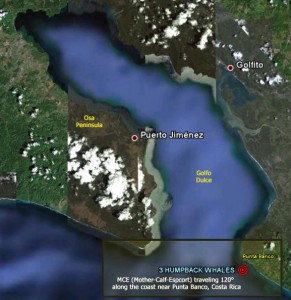 We documented this group of Humpback whales, a MCE (Mother-Calf-Escort), about 1.5 km off the shores of Punta Banco. That’s right where the tuna farm is planned—I mean the exact location! It was a one of our most significant sightings.

The S. Pacific region of Costa Rica is special for Humpbacks. It turns out, this bio-rich spot in and around Golfo Dulce, is the only published place in the world where the migration paths of Humpback whales from both the northern and southern hemispheres cross-over.

Whales from the southern hemisphere also travel from colder feeding grounds, except nearer Antarctica. They come up to warmer breeding/birthing grounds nearer the equator and many arrive at Golfo Dulce, the most northern point of any Southern Humpback’s migration.

While the groups’ breeding/birthing seasons do not coincide—Northern Humpbacks arrive in Jan/Feb and Southern Humpbacks use the waters starting Aug/Sept—this cross-over is more than a delightful little factoid. Remember, Humpbacks are endangered.

Consider the possibility of, say, a late running male from the north meeting an early running female from the south. Bingo!

New genetic lines create healthier populations, especially when they have been hunted to a small percentage of their original numbers. Thus, Golfo Dulce, which is drawing the eyes of cetacean (whale) experts, may prove to be a unique and critical breeding/birthing ground for Humpback whales—a key area that, if protected, could help ensure longevity for the whole species.

The whales we logged during our study were from the northern hemisphere and these three were traveling south just outside the mouth of Golfo Dulce—the baby was playfully breaching and rolling in the navy water the whole time I took photos.

By the time I started shooting video, it had calmed down and was staying closer to mom; although it did breach once on tape. My camera work is cruddy but hopefully you’ll get a sense of the experience. The presence of whales always fills me with awe.