The Spilling of Words onto Paper 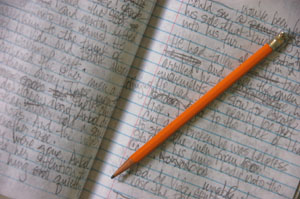 I wrote like crazy while I was living at the OBC in Costa Rica in 2008! I couldn’t help myself; I was so dang inspired! Here are two unrelated literary chunks—ramblings, really—that made it from brain to paper during my time there. I share them because they offer insight into my thoughts and surroundings of the time. But they also exemplify the kind of free-flow writing that allows ideas to rush onto a page unhindered by worries about grammar, punctuation or paragraphing (which can be fixed later).

I cannot stop writing, words gush from me like flash floods, forcing me to dash for paper and pen and hold to them as life rafts until the urgent waves of inspiration have passed. Last night, I woke abruptly at 1:00am, writhing with ideas, only to find my pen conspiratorially out of ink. Unable to sleep without exorcising the words from my head, I had to crawl from the nighttime safety of my mosquito net, quickly apply a layer of bug protection and scurry the full length of the compound to the kitchen for a writing utensil. There, I nudged around in the dark like a large nocturnal rodent, tiptoed like a cartoon burglar looking for diamonds. Minutes later, pencil secured in fist, I hot-footed back to bed and scribbled by headlamp for almost an hour, pages of my small yellow notebook turning black with lead—a frenzy that left me exhausted. Utterly drained, I then slept without moving until a crest of morning sunlight came to jiggle my shoulder.

The power and force of the sea is supreme. Even from here, with a great wall of trees between, the ocean can be heard. The swish and roll, followed by a deep rumble: water tripping on sand and crashing head over heels onto the shore. The sound repeats… The push… the roar and tumble… the pulling back to regroup before trying again. I imagine the vast ocean found guilty of some unforgivable disturbance of prehistory—at which point the ancient tides were cast from the land. Now, in repentance, they endlessly beg, clawing their way back ashore. The bass tone of the water is distance and embedded in the more prominent notes of the night—insects and frogs playing treble chords in this nocturnal music—but when you focus your attention on the waves, listen with head and with heart, the other noises drop away in insignificance. Soon, the deep call of ocean is the only sound you can hear, as if all other tones have been sucked into an auditory black hole. It bellows low and deep, the echo of all life past, present and future… calling us home.

This entry was posted in A Traveler’s Journal, Costa Rica Adventures, Life as an Author-Illustrator, Poetry & Other Writings. Bookmark the permalink.