When a Peccary Come Clacking… Climb a Tree 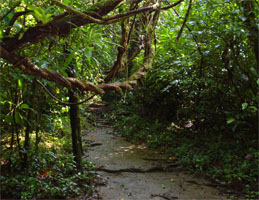 Let’s return to the rainforest, shall we?

One of the most interesting things about Costa Rica is its blend of wildlife. Think of Central America. Now visualized that narrow strip of land as a natural passageway where species from both southern and northern regions can mix together. Costa Rica is, of course, home to the typical rainforest creatures—boa constrictors, monkeys, parrots, sloths and kinkajous. But there are also some animals familiar to North Americans, including White-tailed deer, coyotes, coatis (also called coatimundis or in Spanish: pisotes), Ringtailed cats, Great Blue herons and mountain lions.

On an afternoon walk by myself, stepping softly through the quiet rainforest, I startled a herd of Collared peccaries (the same species we call javelina in the desert). The mass of stocky brown bodies crashed through the understory in an uproar, bursting into sight and then arching away. They tore deep tracks in the muddy trail before vanishing as quickly as they appeared.

This was not the first time peccaries had darted across my path. They have a good sense of smell but poor visit. With no breeze to push my scent ahead of me and thick greenery blocking their already challenged eyesight, it was easy to come upon them without notice. I was not fearful so after the stunning moment passed, I ventured forward to resumed my journey. Grunt, grunt, came the voice of a single peccary ahead and to my right. Two o’clock. It was unsettlingly close, a few paces away in the foliage—perhaps an young male unhappily separated from its herd or, more dangerous, a mother separated from her red (the nickname given to baby javelinas). Having a fair amount of experience with peccaries in Arizona, I stood still to give the animal time to think and room to pass. Yet my presence was still disturbing.

Clack-clack-clack! Clack-clack-clack! The distinct warning call of a peccary came sharp with intent! I couldn’t see exactly how close we were, so I took a careful step backward to allow a wider birth, but this minor infraction of movement incited a false charge from the overly anxious animal! Clack-clack-clack! it repeated, rushing forward, cracking leaves and vines underfoot!

Yikes! Considering my options, I stepped up into the low fork of the tree next to me—an action that felt equal parts silly and prudent. I waited. The animal grunted and snuffled in the undergrowth. I stared hard into the thick flora trying to resolve a peccary in the green and brown patchwork, but the threat remained a phantom. I waited longer and was taken off by daydreams stirred by my unexpected view through the trees. Looking around with four feet of altitude I was a giant, a dinosaur, a tree sapling rising among brothers. I gazed beyond the trunks that marked an endless vertical grid and imagined myself poised in this tree to gather some vague scrap of information to guide me… an explorer, an woodsman, a lost soul.

At last I heard the peccary turn and trot away in the direction of its family and felt relief to no longer be a source of stress for the poor beast. When I was alone… just a regular human standing in a tree… I giggled. Then I took one last of peek from my vantage and shimmied back to the ground. Another silly story for the books… or, er, the blog.